A unique experience, which saw four young patients learn the delicate art of sailing and the secrets of the sea. A medicine that looks to the patient as a whole, in an attempt to recreate trust and confidence in their abilities.

Parkinson’s is not just what it appears to be, tremors, stiffness and difficulty in movement. Behind these symptoms, generally well managed, you can hide moods and unusual behaviors with great heterogeneity, defined as “non-motor symptoms”: anxiety, depression, apathy, psychosis, obsessions and behavioral disturbances. In addition to this, the patient risks closing in on himself, of leading a sedentary, habitual life, perennially referred to the disease, and difficulty in undertaking new initiatives with aggravation also of movement disorders.

A vicious circle is created that the organizers of Sail 4 Parkinson have tried to break with an unprecedented project, carried out by the association “ParkinZone” with the collaboration of the Klesidra theater company. The clinical heart of the initiative was Dr. Nicola Modugno, Head of the Center for the Study and Treatment of Parkinson’s Disease of the I.R.C.C.S. Neuromed. Together with him, Daniela Meloni (Limolo Vela) and Giangi Chiesura, Environmental Hiker Guide (Naturawentura) and Imogen Kusch (Klesidra) ..

“It is a common opinion – says Modugno – that Parkinson’s patients cannot easily learn new skills, face new situations, develop new skills and adapt easily to changes. They tell us that they often feel “stuck” with their body and mind and that they “cannot” perform certain tasks, such as walking, even if they are able to do so.

Apathy and anhedonia can be subtle and very disabling symptoms.

With Sail 4 Parkinson, patients have experienced new activities: sailing and sliding on water. This is because both are rich in rapid changes, need adaptation to weather conditions, sudden and sudden decisions and require the group’s ability, performance and synchrony “.

The project took place in Sardinia, in the Sinis Peninsula, between Torregrande, Tharros, Cabras, Putzu Idu, Capo Mannu and the island of Maldiventre. It involved four patients aged between 45 and 56 years old. For a week they learned all the rudiments of navigation, from preparing the boat to hoisting and lowering the sails to rudder in the open sea. But not only that: they faced the not easy art of surfing and stand-up paddling (where you stand on a surfboard and maneuver a paddle to move), swam and walked with Nordic Walking sticks . In addition to this they visited ponds and salt marshes, countryside and mountains, had lunch every day on a different beach, dined in the countryside, danced, played and participated in tastings.

“The environmental context is extremely important. – continues Modugno – In Sinis the sea and nature predominate, and all activities take place according to them and the climate that can change very quickly with the rising of the Mistral or Libeccio wind. Nature teaches changes, elasticity, adaptability and learning. The hope is that all this can contribute to generate happiness and fun, awareness and satisfaction with one’s skills and potential. And from all this comes the perhaps most important treasure that a patient can bring back: self-confidence, self-esteem “.

It is good to underline that such an activity is not just leisure: there is a very serious research background. The scientific works of the last decade and clinical experiences have in fact shown that sports and artistic activities practiced in a constructive and engaging way are able to significantly improve the management of symptoms such as apathy, anxiety, depression, fear and even postural alterations and motor coordination disorders that significantly affect patients’ quality of life. What recent scientific evidence has shown is that sports activities and constant exercise are able to stimulate “neuronal plasticity”, the ability of the nervous system to learn and adapt and probably to stimulate neuroprotection. In addition to this, numerous scientific evidences have shown that motivation and incentives can improve control in cognitive actions and motor behaviors. The final impression gained from this experience was that by managing to create an adequately stimulating, beautiful and welcoming context, the patient is able to find apparently dormant resources and overcome apparent limits that have appeared in the path of illness. And indeed for Dr. Modugno, who follows about a thousand patients in the Neuromed center, Sailing Parkinson is certainly not the first initiative aimed at total involvement. Theater, art and dance are now an integral part of his therapeutic plans. 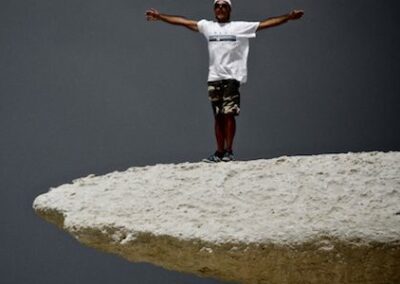 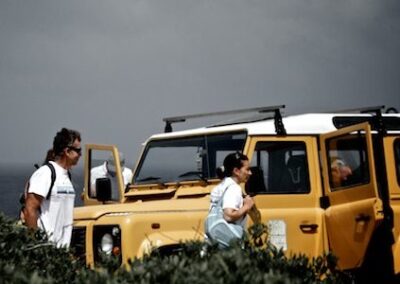 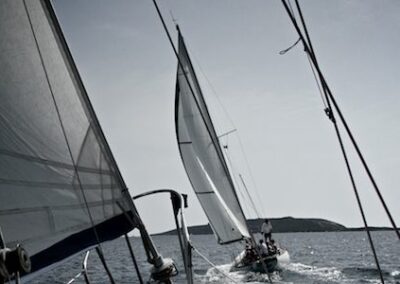 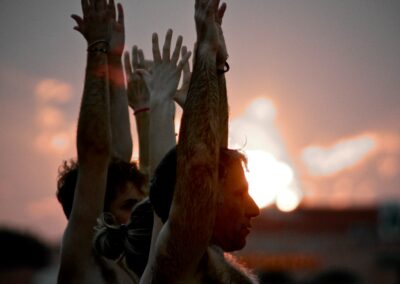 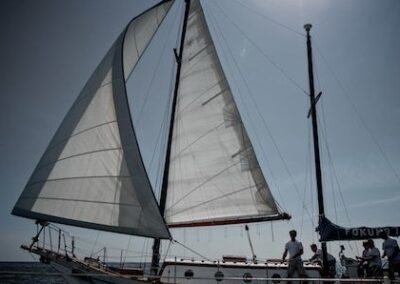 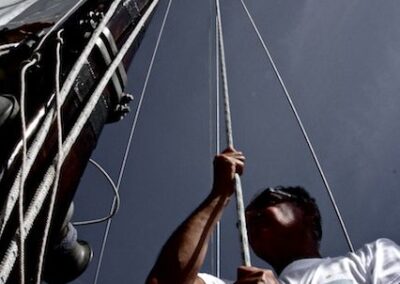 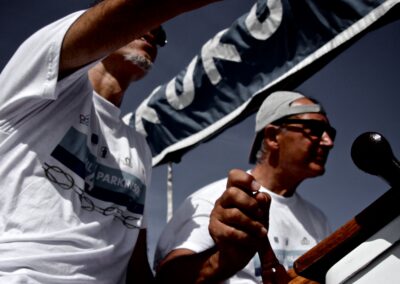 “It was an exciting experience and capable of stimulating in me how dormant and muffled by the disease.

I perceived the wind, the flavors, the colors clearly and freely. The feeling of setting sail, of letting go of the moorings, was for me the metaphor of being able to try to float in a new possible reality, towards new horizons and aware that my limits can also be moved further, not by much, but by just enough to feel alive and peaceful. As if the tightening circle loosened for a week…

…The patient who climbs the space of the visit between four walls and expands in dimensions of tests, attempts, remodulations, awareness. Against all medical rules we have been injected with the courage to do something different and within the limits of one’s possibilities. My heartfelt thanks go out to all…”

“…The organization catapulted us into a totally new reality, challenging in terms of times and changes in the rhythms of the day, so much so that initially I worried about not making it or at least having to pay for it in terms of health, instead every effort it proved possible and each stage was respected. The nutrition was not only extremely healthy from the nutritional point of view but extremely satisfying on the palate and sight. The great Daniela has been able to amaze me in every dish and even in every sandwich. An unforgettable taste that went perfectly with the wild land of Oristano. The splendid herbs of the vegetable garden, omnipresent, stimulated those four residual dopaminergic neurons giving me a very pleasant sensation.

Accompanied by Giangi’s Land Rover we crossed wild lands and coasts, full of wind and history, and his explanations made me know a slice of the world that I had only seen on maps…”